What is prolapsed disc?

The disc is a firm but compressible cushion between each vertebra, consisting of a firm outer ring and a soft central core. Prolapsed disc is a condition in which part or all of the gelatinous central portion (the nucleus pulposus) of an intervertebral disc is forced out a weakened part, resulting in back pain and/or leg pain. Most low back injuries are not the result of a single exposure to a high- magnitude load, but instead a cumulative trauma from sub-failure magnitude loads: for instance, repeated small loads (e.g., bending) or a sustained load (e.g. sitting). The back is more vulnerable at certain times of the day. In the first hour after awakening, or after prolonged static forward bending such as sitting or stooping, the body is at greatest risk. While bending forward, the gelatinous nucleus would be pushed back, with the fact that the ligament & fibrous ring at the back are congenitally weaker, they may eventually fatigue and damage will be resulted.

Diagram showing the change in disc pressures in various positions 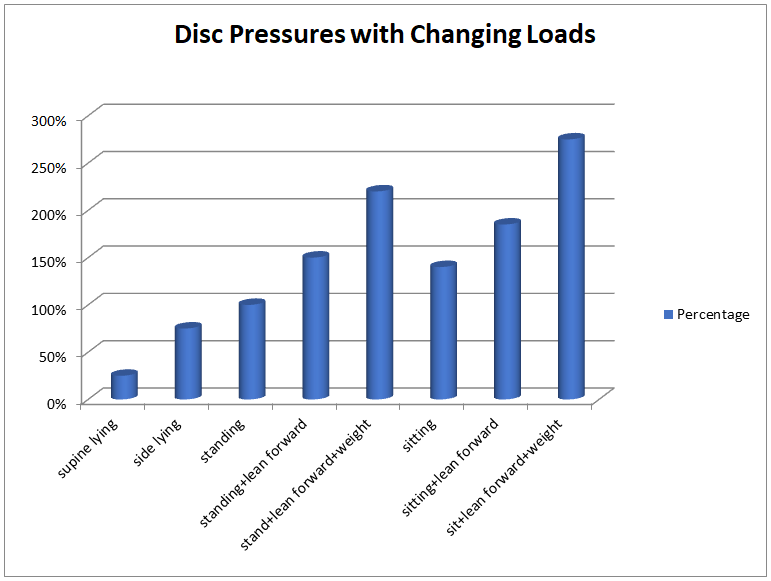 The higher the pressure in the disc, the more potential risk it causes to the disc. Patients should AVOID those positions.

Maintain good posture helps to prevent undesirable stress to the spine and the disc, avoiding deterioration of the condition.

Look forward with shoulders level and back straight.

Sit up straight on chair with back fully supported, hips and knees kept in 90 degrees with both feet flat on floor. If possible, use a lumbar cushion or roll. Avoid sitting on sofa, soft surface, low stool, ground or long sitting. Whenever is possible, try to limit the duration of a seated posture to the minimal.

Side lying: slightly bend the knees and use a pillow between the legs for support. Supine: May use a towel to support the lumbar curve or use a pillow to support under the knees in order to relieve the muscle tension of the back. Turn to non-painful side first. Then gradually lower the legs down over the edge of bed and support oneself to get up with upper limbs. After sitting up, the patient may use both hands to support the low back, thus reminding oneself to keep the back straight and prevent stooping. Adjust the seat so that the hips and knees are kept at the same level. It is highly advisable to use a lumbar cushion to keep the back straight if driving is unavoidable. Caution would need to be exercised upon getting in and out of car to avoid any form of trunk bending.

The “Mckenzie exercise” can be done in a progressive way according to the instructions of your physiotherapist. The above information was produced by Physiotherapy Department, Canossa Hospital (Caritas).